zelda dehollander September 30, 2016 0
HOUSE prices are set to smash through the half a million pound barrier in Dorset within 15 years, according to new research.
Estate agents eMoov has mapped what the average house price will be in 2030 if prices continue to increase at the rate they are currently.
But research is based on the average rate of increase across the whole country – and prices in Dorset are rising even faster. Calculations by the Echo show that if this faster rate of increase is taken into account, average house prices could reach more than £800,000 by 2030. 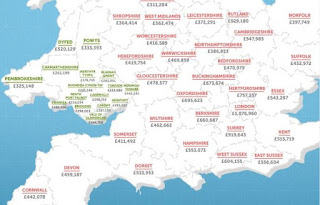 The eMoov report suggests that in 14 years the average house in Dorset will set buyers back by £533,953 – the highest in the South West and one of the highest in the country.
This is a 70 per cent increase from current house prices in Dorset, which stands at £313,054 – and a 433 per cent increase over 30 years from 1999 when average house prices in the county broke the £100,000 barrier for the first time.
Researchers took the average increase in property values across England, Scotland and Wales between 2000 and 2015 – 85 per cent – and then added this to 2015 house prices to project how much the average house price could cost in 2030.
But Echo research shows that house prices in the county are rising faster than the national average. If, in Dorset, house prices stood at £100,000 in 1999 and £285,415 in 2015, this is an increase of 185 per cent. Add this percentage increase to the average price in 2015 and a home in 2030 in Dorset could stand at £813,432.
Borough councillor Kevin Brookes, who has been housing spokesman for two years until this month, said he expected house prices to continue to rise.
“It is a supply and demand market and the price will go up if there’s a shortage. The answer to that is to build more homes but it’s difficult when you sit on the planning committee trying to justify building 50 homes somewhere and there’s a lot of objections. More people are becoming concerned about the environment, about having green fields around.”
He added that for many people, such calculations are ‘an academic exercise’ because they will never be able to afford an average-priced home.
“Having said that, there are certain parts of Bournemouth, Poole and certainly Purbeck which push the average price in Dorset up. In Weymouth and Portland you tend to find more homes below the average county price.”
Property director for eMoov Lewis Rossiter said: “The results of our latest research are startling yet at the same time unsurprising. Whether we stay in the EU or not three things are for sure; death, taxes, and property prices increasing.“What it means for sellers in the South West will vary. For people selling to move up the ladder to a bigger property it will remain relative as if they choose to stay in the area, which most people do in the South West, prices will increase on their purchase.”

How Long To Sell A Property ?

This will close in 20 seconds